You know what I love?  A lighthearted book that keeps me guessing, keeps me caring about guessing, and carries me through to the end on a fun-sized roller coaster of concern for how things will turn out for the characters.  The Bitches of Brooklyn is such a book. 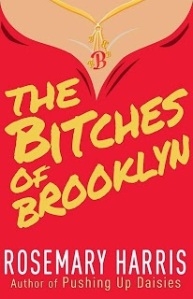 Rosemary Harris has done a fantastic job crafting realistic characters, realistic friendships, and making the lives of the five bitches from Brooklyn feel distinct, varied, and interesting.  You personally know at least two of these women, and have probably met the other three.  Some of them are your best friends, and at least one is your arch nemesis.  Each character is instantly recognizable as someone who could be sitting next to you at the movie theater.

Even better, the writing “for every woman who’s ever had a best friend and wondered…is she really,” is quick witted, clear, and keeps you hopping and hoping.  You’ll find yourself wanting the best for each of these women, and wondering just exactly what that will entail.  You certainly won’t be disappointed.

This was my lunchtime novel for about four days, and I really looked forward to cracking it open for company on my lunch hour.  As much as I wanted to get to the end to find out how the original set up was resolved, I was sorry to get to the final chapter because I really liked these women.  I would read spin-offs of this book, but I would really love to see a prequel.

For a light, fun chick-lit read, this one is 5 stars for me.

About The Bitches of Brooklyn and Rosemary Harris:

Rosemary Harris has been a bookstore manager, a video producer and a public television exec. Her debut novel, the Agatha and Anthony-nominated, Pushing Up Daisies, was followed by The Big Dirt Nap, Dead Head andSlugfest, all titles in her Dirty Business mystery series.  She is past president of Mystery Writers of America’s NY Chapter and Sisters in Crime’s New England Chapter. Like some of the characters in The Bitches of Brooklyn she was born in Brooklyn but now lives in New York City and Fairfield County, Connecticut.

To learn more about Rosemary and all of her books visit her atwww.rosemaryharris.com and Like her on facebook atwww.facebook.com/RosemaryHarriswriter

Trade paperback and ebook available at Amazon and bn.com now!

From the author of the Anthony and Agatha-nominated Pushing Up Daisies and Dead Head.

Are they really bitches? That depends who you ask…four friends await the arrival of a fifth at a secluded Cape Cod bungalow where they spend an all-girls weekend every summer. But this year the fifth woman doesn’t show. Instead she sends a note that reads –  “I’ve run off with one of your men.”

Has she? Is it a prank? Do they run for the phone or try to enjoy the weekend without her? Fun, flirty and filled with Harris’ trademark snappy dialogue and quirky characters forced to reevaluate their marriages, their friendships and their memories, The Bitches of Brooklyn has been called “a cross between Pretty Little Liars and Sex in the City.”

Inspired by a classic Hollywood film, The Bitches of Brooklyn will appeal to readers of Jennifer Weiner, Cathleen Schine and Susan Isaacs and is for every woman who’s ever had a best friend and wondered…is she really??

“Rosemary Harris is a GEM of a writer.” Joanne Fluke, NYTimes best-selling author of the Hannah Swenson series. “Smart, sassy and sophisticated, The Bitches of Brooklyn may be the best female buddy book yet. I dare you to put it down.” Elaine Viets, best-selling author of The Dead End Job series and Catnapped!

Follow the blog tour! Rosemary is on tour until December 23rd.