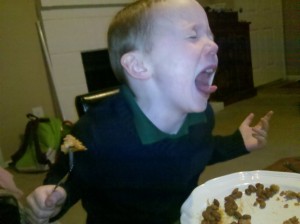 Thor was not impressed at all with the Italian Turkeyloaf recipe. I asked him for a face that summed up his feelings, and this was what he gave me.

Prior to that, when I was insisting that he at least try more than the first bite he had put in his mouth, howling before he had even bitten down, “Mama, it tastes baaaad!” I got a picture of his truly sad face. He was grossed out by the meal, as was his father.

B hates meatloaf of any kind. The texture is too weird to him. This was a turkey loaf, so it was especially repugnant. He felt sorry for me, given Thor’s extreme reaction, so he ate most of his serving, but he was obviously sad, too. He said it didn’t taste bad, but he hated the texture and the ketchup sauce on top, and the…he had no words for it, but he kind of mashed the meat around on his plate.

I ate a piece and I liked it. I thought it tasted good.

Thor ended up eating five big bites. Three were required, and then he took two more for a shot at a sugar-free lollipop. That means it didn’t taste that bad. If Thor doesn’t like something, such as the tiny burgers with peas in them, he cannot be enticed into eating it. He will say, “You know what, Mama, I’m not really hungry for ice cream. Or anything at all.”

Anyway, I put the Orange Puree (carrots and sweet potatoes) in this one. B swore he could taste the vegetables, but I’m skeptical. I couldn’t.

If I make this again, I will do it as meatballs or a burger patty. While my guys hate meatloaf, they love the other two. Makes no sense to me, but I’ll go with it.