A few years back, when I met Tamara, one of the first things I did was stalk her blog. Of course, the first thing I read has stuck with me since, and I think about it more often than you’d probably imagine.

You should read the whole piece, but I’ve pulled out the quotes that get me to the gist of where I want to be in this entry:

In English, I am sloppily verbose. I have a treasure trove of vocabulary at my disposal and search for just the right words to make my points. I use two, three, four different ones per idea with slightly different nuances to deliver the completeness of what I’m attempting to convey.

In French I am spartan. I have minimal command of the language. I have no nuances—everything I say is stated clearly and plainly. There is no subterfuge or verbal manipulations. I do not have the capacity for double entendre, coded language or farcical humor. If I want to express a new thought or idea, first I have to look up the words.

–slowly, slowly I began to learn. I started to collect a vocabulary.

Now two years in, I still struggle–I regularly have to decide in terms of communicating: what are the words I need to know?

In conversation with a French friend who speaks no English, he observed this about me: “I thought when I met you, that you were not for real. I kept expecting you to not be so nice, to get angry or to do something mean. But you never did. You never get angry!”

“NO” I said. “I DO get angry! But I do not know the words. So I have to choose: Should I look up the words to express my anger? How important is it to me? Do I want to know how to fight or say mean things? I decided no. So then I stop being angry. Because I don’t know the words.” 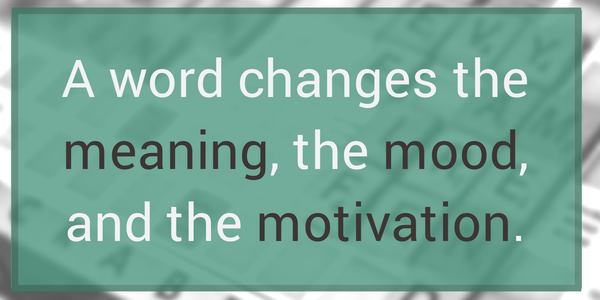 I don’t think I know the words I need in order to express how I feel about this year’s election results. I know the word “disappointed”, but it really doesn’t convey how I feel about people being able to watch a man mock the disabled and jeer at war veterans, and excuse his behavior enough to say, “Yes, that’s the man I want representing me to the world.”

I know the word “dubious” which is the word I ascribe to my feelings about the media suddenly revolting against the candidate at his use of the term “pussy”. THAT was what did it for you? See, I don’t believe that. I think you were just hoping for a hook to hang your horror on, after having laughed and applauded for so long. You wanted a speed bump for the roller coaster you’d switched on, so you could say you tried to stop it. I’ve been a woman in the United States of America for 45 years. I know better than to believe you care whether or not I’ve consented to a man grabbing me by the pussy.

I know the words “cognitive dissonance” because I feel their effects every time I say to myself, “It’s going to be okay,” and I realize that the only reason I can say that is because I am white, straight, cisgendered, middle-classed, and educated, with other white, straight, cisgendered, middle-classed family members to fall back on if we fail. I am not a hungry child, whose mother is working two jobs and still can’t afford daycare. I’m not an elderly person, living on the scraps of Social Security. I’m not a young adult whose parents brought me to this country as an undocumented infant, who has only ever known this nation as a homeland. I’m not a mother, looking at her black son, hoping he manages to avoid the police, or at least unlock the magic combination of submission and approval that will keep him alive when he’s pulled over for speeding. I’m not a soldier, who may have to go into actual battle because of a Twitter war.

I know the words riddikulus, obliviate, and expecto patronum, but none of those work for me.

I’ve been trying to find the right words for a post about this since before November 8. I haven’t known them, so I haven’t said them.

But, here are some other words I know. These are words I believe in. Words that do work for me.

Don’t stop ’til you get enough

Be the change you want to see

Work for what you want

Do unto others as you’d have others do unto you

I’m leaning in to the words I know best. I don’t have time to try to find the other ones.