I’ve sent another restaurant review over to Jewels from the Roving Stove, so in a few weeks, you can expect to find out what it was like to eat at 40 Carrots, the Bloomingdales lunch counter. That was the only meal I was really able to photograph. PJ Clarke’s was too dark, and I was getting side-eye over the flash on my camera, and I thought I would look way too Country Mouse if I started taking pictures of my crabcake at Ed’s Chowder House. Though the food at the Starlite Diner was very good, it looked pretty nasty, so I didn’t bother.

One meal I did photograph was the room service I ordered. Since a review of a room service tray doesn’t seem very interesting, I thought I would give you a full review of the hotel, so the next time you’re in the Midtown neighborhood, you know where to stay.

First, B and I are experienced at hotels. We have stayed in very posh places where they practically tuck you in at night, and we have stayed in rat traps where the doors don’t even shut all the way. The Doubletree Metropolitan on 51st and Lex (That’s Lexington if you aren’t from around town. Don’t call it Lexington, it will give you away.) falls somewhere in the middle range of nice. The rooms are neat and well appointed with clean furniture in good condition, and the bathrooms were just as tidy.

I noticed immediately that there was not a coffee maker in the room. That drops the place down by a whole star, because I want my coffee when I want it, and I don’t want to have to call someone to get it. Also, the coffee in the hotel was way, way, way too strong. If you know me, you know how strong that must be. It was thick even. That, my friends, was the absolute worst part of the hotel.

From check-in to check-out, we had excellent service and I was very happy.

Thor and I arrived the day before B, and got to the hotel in a flurry of excitement over getting to see Aunt Amy. Somewhere in the mix, I lost both my ID and $20. I found this out when I went to check in. No ID. Not my expired plastic license, not my paper receipt showing I had renewed my license. Nothing.

“Take your time,” said the desk clerk. “This happens to a lot of people. Don’t worry.” Surprisingly, she clearly meant this, even though there was a line behind me.

Once I was sure I had no Drivers License, I pulled out the first thing I saw. My substitute teaching ID badge. “Great,” Desk Clerk smiled. “Here are your keys. And don’t forget your cookies.” 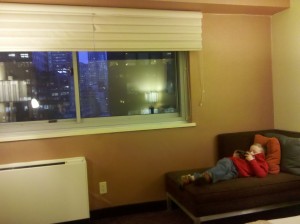 Cookies?! Upon check-in, the hotel provides warm cookies. Thor gave this two thumbs up, or would have, had his thumbs not been busy pushing buttons on his PSP. One of the funniest things that happened was watching him walk into a closed corner of a sofa and table, and keep bouncing back and walking forward, confused as to why he wasn’t able to walk straight through, eyes on that PSP, playing Dig-Dug. Amy and I both enjoyed that one. Tired, zombie, video game boy. (He had been up since 3:30am, and it was 1pm our time by then.) We got up to our room, and Thor found a roosting place quickly. 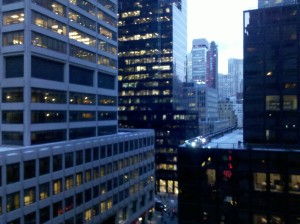 Amy and I discovered that my view was pretty fantastic. Considering that when I stayed at the Paramount Hotel on my first trip, my window overlooked a brick wall, I was very excited to have an actual view of my cross-streets. Later on, as we waited in the room for Amy’s family to arrive, we watched the goings-on in the offices in the building across the way. There was one terrifying executive, to and from whose office people would actually run. I’m sure we could have seen the beads of flop sweat on their brows, had we thought to use the zoom on my camera. Alas. Thor stood at the window the next morning, counting yellow cabs. He stopped at 72 with an exasperated sigh, declaring he had never seen so many taxis in the world! Me either, Thor. Me either.

Our first meal in NYC was at the world famous P.J. Clarke’s (which I keep confusing with PJ O’Rourke, who is not a restaurant at all. Sorry, P.J.) where I had Irish Stew that was so good I wanted to just get inside it and roll around. I ate every scrap in my bowl. Amy had a Shepherd’s Pie that was also very tasty. Thor ordered a cheeseburger and started in on it, but then something happened. Almost mid-bite, he fell asleep. This became a running theme. Thor fell asleep at every restaurant we visited.

This is why I ended up ordering room service. My child is a great traveler, but his inner clockworks were completely off the whole time we were away on this trip.

I ordered a pot of coffee, a lemonade (for Thor), baked macaroni and cheese, and asked for chicken noodle soup as my side dish. I have to tell you that I was really pleased. Not all room service food is very good. Not all room service food arrives hot, and looking like it just left the kitchen. This tray did. And, for New York, I didn’t feel like it was ridiculously overpriced. It was just overpriced, you know?

So I was happy with the room service, and happy with the waiter who brought my tray. I was a little unhappy that the maid service left the open creamer jug on my dresser for three days. I was afraid to sit that in the hallway because of foot traffic, but maybe I should have gone ahead and done that? Christina will have to let me know.

After B arrived, Friday, and after family dinner (at which Thor fell asleep, see sprawling booth photo above), Amy’s eldest daughter babysat her younger sister and Thor, while the grown-ups visited the hotel bar. Aside from being 300 degrees, the drinks were good, and the seating was comfortable. The waiter did get my drink order wrong once, but I didn’t mind. When I pointed out that it had been the wrong drink, he went into a lengthy diatribe about how important it is to get what you order, when you order it. Preaching to the choir, man. He was entertaining, or I was on my third martini, so it didn’t matter to me.

I slept like a baby in the room. Comfy bed. Soft, soft sheets. Perfect pillows. For New York, it was a fairly dark room, and although we were just half a block from a busy fire station, or lust factory as Amy called it, I didn’t think it was that noisy. B did not sleep well at all. He said it was awfully noisy. I say, “Honey, it’s the lullaby of Broadway. The rumble of the subway train (just under our hotel), the rattle of the taxi…Manhattan babies don’t sleep tight, until the dawn…”

All of the staff at the hotel were kind and attentive, and I felt like they went out of their way to make my stay pleasant. They were good to Thor, and good to us. What more can you ask? The business center was well stocked and easy to use. The fitness center looked great. The food in the restaurant was basic, but not bad, and the location couldn’t have been better for us.

I would absolutely stay at that hotel again. Although, I would get my own taxi on my way to the airport. The doorman who put me in one, put me in a gypsy cab. That’s some scammery right there, but I learned. And lived, thank Cheezus!

One more picture? Speaking of cheese…